Note: Whenever I use “we” in the article, I am referring to all humans, male and female. 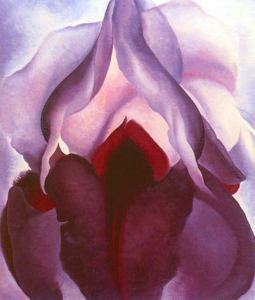 This is a painting called “Flower of Life II” by Georgia O’Keeffe. The painting resembles a lot of other things. Or maybe not. Maybe it only looks like a flower. O’Keeffe certainly meant it to be a flower (she said so, in an interview). But the artist is rarely always there when her artwork is being witnessed. She has no control over how the artwork is interpreted by her audience.

A woman expressing her sexuality is still considered taboo by many somehow. As a girl that grew up on Beyonce videos and “Lizzie Mcguire”, I didn’t think about how people would react if I was expressive about sex. But slut-shaming a girl or saying how bold she is or taking it to be an invitation when she is being sexual is prevalent in places and circles one would think are quite progressive.

A woman’s expression of her sexuality has always been controlled and monitored by the male. Strip-clubs, pornography, sex work, and stilettoes are all male-creations made for the amusement of men, but engaging women. Therefore, anytime a woman is seen being sexual out of these scenarios of entertaining the man, it’s “out of turn”. But guess what? It’s never the woman’s turn. What everyone (men AND women) needs to understand is that when Beyonce is up there gyrating to her songs, it’s not because she wants to please a man. She is only expressing her own sexuality and trying to convey  “Hey! I like to have sex in a specific way too!” She isn’t trying to get some, she’s simply saying that she would like to. And even if she is trying to get some, so what? That’s the point.

Women artists that have tried to express sexuality, and talk about sex explicitly through their art have already been victims to unfair censorship and unnecessary controversies which very obviously wouldn’t have existed if the artist were a man.

This isn’t a rant about how vicious men are. This is simply remembering and being aware of the woman’s backstory. Feminism today works as a time machine that shows us what women over the decades of human existence have been through, makes us realize how we are still under the effect of that male-dominated past, and inspires us to unlearn the stigmas that we as a human race have learned and learn anew into the future.

It is crucial to understand that a woman (or anyone) expressing sexuality (in any which way) isn’t shameful, out of turn, unnecessary or offensive. It is amazing, on point, vital, and none of your business.

So, here’s a bunch of women who have redefined the way women talk about sex.

The Urdu writer, famous for her feminist fiction, wrote stories that expressed the female sex urge and hinted at homosexuality in a time and place where no one would fathom the “boldness” of women. She received death threats after she published her story “Lihaf (The Quilt)”, and was called to court. She cleverly won the case and did not compromise her freedom of expression. Chughtai remains an inspiration to the women of South East Asia, and a sinner to all obnoxious men for going against the patriarchal rule about female artists and courageously pursuing and exercising her rights as a writer and a person.

“If contemporary literature is filthy then one can assume that the modern era too is filthy because literature is a representation of its times. Where lies the artist’s fault?” – Ismat Chughtai

The creator of the hit TV series “GIRLS” portrays sex in her writing in a way that perhaps has never been used by the visual media. It’s not an unrealistic portrayal played against romantic music, featuring seductive, choreographed angles of the bodies of actors. It’s strange, awkward, and more realistic. Not explicit, just more realistic. Although the show faces flak for being white-upper-class-centric, where Dunham wins is showing female bodies without pretenses, telling as it is. It might be the first time on television that a not-skinny girl is shown being worriless-ly naked.

“I do think that kids have been miseducated about what sex is by films. I think that films have white-washed sex in many ways and sort of tried to hide what is messy and what is challenging about it.” – Lena Dunham

She is a queen in the western music industry and plays the whole game by her own rules. Her lyrics interchangeably show vulnerability, strength, passion, sex, love, and religion. She loves her sexuality and is not afraid to show it to the world. In fact, she goes a step ahead and sings how much the world loves her for her direct expression. When almost every male hip hop singer and rapper was making writing songs that promoted blow jobs, Beyonce made a song where the woman is asking for oral sex. And when as a woman you’re told to be shy and lady-like, the song comes as a refreshing wave.

“There is a double standard when it comes to sexuality that still persists. Men are free and women are not. The old lessons of submissiveness and fragility made us victims. Women are so much more than that. You can be a businesswoman, a mother, an artist, and a feminist — whatever you want to be — and still be a sexual being. It’s not mutually exclusive.” – Beyoncé 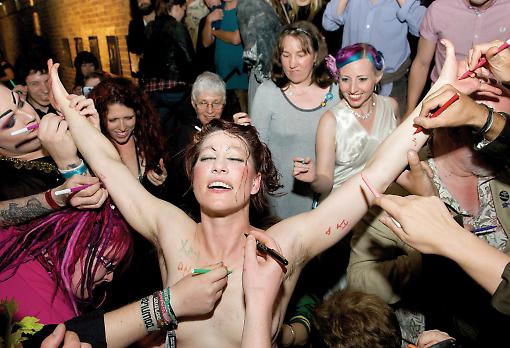 Amanda Palmer stands naked and beautifully unshaven after a gig in a German pub and asks her audience to draw on her body and tells them how much she trusts them with her vulnerability. This is a woman who writes witty songs to the pathetic Daily Mail after they make a big deal out of a wardrobe malfunction and performs naked on stage as an answer to their stupidity. The Daily Mail sees a nipple and forgets her performance, and also forgets that a lot of male metal artists perform shirtless on stage, and expose both their nipples.

“Here and now in this culture, especially for the female, being naked in a situation that’s not explicitly sexual just makes you very vulnerable. I am very fascinated by the ability to push my own boundaries of feeling vulnerable.” – Amanda Palmer

“The more that you’re supposed to not write about something, the more I (feel like writing) about it. Not to be controversial. But so much of being a girl is visceral, and you are not allowed to speak about it.” – Caitlin Moran

“To hell, to hell with balance! I break glasses; I want to burn, even if I break myself. I want to live only for ecstasy. I’m neurotic, perverted, destructive, fiery, dangerous – lama, inflammable, unrestrained.” – Anaïs Nin

“Women are always taught by society that they cannot be sexual being in the way that boys are.” says Chimamanda rightly.

Feminism doesn’t always aim for the white-man-ideal. Sometimes all it wants to do is let the woman be more of her authentic self. And what that self is is for her and no one but her to decide.

Any kind of policing over a person’s way of expression is basically censorship. And when no one asks why something has been censored, and if that sort of a censorship is fair, and was it based on objective reasons or subjective sexism, the “boldness” of kick-ass women is needed.

One thought on “Women. Art. and Sex.”