On The Road is one of those books that you always mean to get around to reading, but never do. The book was gathering dust on my waitlist for the best part of 4 years, and on my bookshelf for 2. I’m happy though, because it’s not the kind of book you can appreciate unless you’re in the 17-21  age bracket, when you’re just beginning to negotiate between how breezy and how grounded you want your life to be, and you still have the luxury of being indecisive.

As luck would have had it, I was literally On The Road when I read it – I was on holiday with my parents, during a particularly inconvenient week re : feminine hygiene. Knowing that a) I would necessarily have a day where I wouldn’t be able to go out b) I wouldn’t understand anything on television anyway, I packed On The Road. I’d get around to reading it, if I had nothing else planned.

I’d bought the book when Landmark was having some sort of sale, quite a bit later than I should have. I had my hardcore Beats phase at 16, because Howl was (and still is) nothing like anything else, and my just-past-10th-grade self identified strongly with Ginsberg’s attempts to carve some magic out of all the drudgery that life gave him. In retrospect it’s a good idea that I read it at just-past-2nd-year-of-college though – even though it is a pillar of Beat literature it’s not infinitely re-readable the way Howl is, and you need to know what you like and dislike (in life and in literature) before you can figure out if you like or dislike this book.

There is no plot to this book, nothing happens really. It really is what it claims to be – on the road. The literary form and style is as on-the-road as the content – it is a stream of consciousness that isn’t afraid to go anywhere and talk to anyone, and it is a spirit that refuses to live anywhere except the present. There are 4 parts, and each chronicles a different road-trip. There’s a lot talking, drinking, partying and making-out – equally scandalous and romantic to the unaccustomed. There are rare moments of quiet introspection, which Kerouac does surprisingly well. I can’t spoil or spoiler-alert this book for you really, because there’s no character arc or unfolding of plot. There’s just the constant whirpool that young adults are accustomed to, where every moment is stitched onto the next and it’s almost your duty to make the next moment better than the last. You’re just there for the ride. There is no destination, and there would be no point in having one. 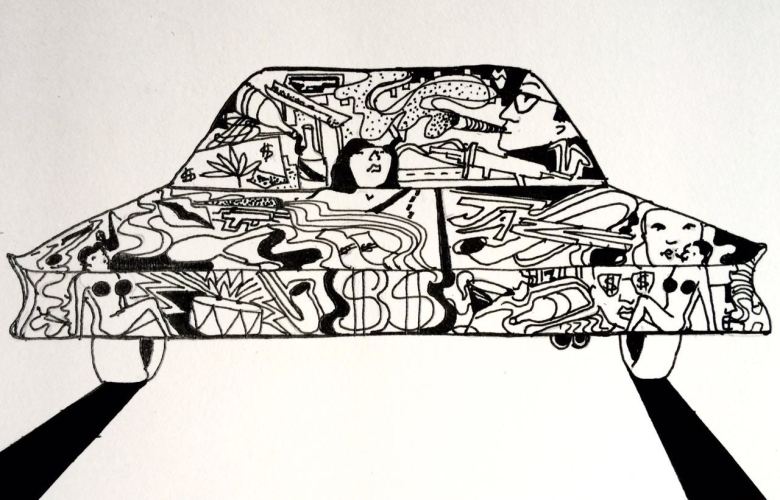 On The Road is narrated by Sal Paradise (a stand-in for Kerouac) and is about his travels across America – mostly alone, often with Dean Moriarty (a stand-in for fellow Beat Neal Cassady, known not as much for his writings as for his colourful sex life), and sometimes with Carlo Marx (a stand-in for Ginsberg) and other, less well-known characters. Sal Paradise and Dean Moriarty are with you through most of it – Dean is the hero of the times he is there, and Sal is the hero of the times he isn’t. The book doesn’t follow them so much as allow you to live through them, without judgement, as someone who has come along for the ride. Kerouac’s style is a great example of an archetypal first-person-adventurer narrative. He is blind to any experience outside his own – and even though he is blind to this blindness, he makes every attempt to meet life on all its terms and try to live as widely and deeply as possible. He is unaware that he is also living as irresponsibly as possible, and he might not be a hero in someone else’s eyes. It’s almost a privilege to be able to read this narrative, because of the amount it reveals about how we think about ourselves.

The things that it gets right – the style, the ease, the breeze, the constant presence of a present tense in mood if not literary technique – these, it gets really right. It does get some things massively wrong, though, and readers who hate Kerouac do it with good reason. If it takes only a small spark to light your fire of Righteous Anger, this is not for you. If you fret about sanskaar, this is not for you. The toxic masculinity portrayed here doesn’t make easy reading for someone concerned about the impact it can have. Kerouac is not outright racist or sexist – even when he is, you get the feeling that if he were a social media user in the 21st century, he would want to be politically correct. He never means to abuse his privilege – he just doesn’t see it. There is no great character development because in his time and place, it is quite alright for him to be childish and irresponsible. He ends up almost glorifying poverty, in a way that annoyed me. He does wish there was no racial segregation and that women had more freedom – but he won’t give up his time to try and bring that change. If you blame him for these, you will not enjoy the book. If you acknowledge that you’re reading these with a significantly evolved collective moral compass, then you might enjoy this quite a bit. If you just go with it, see as he is seeing and worry only about what he worries about ie nothing at all, then you will get the most out of this book. If you can separate Sal Paradise from Jack Kerouac, if you can separate some “wrong” act from the sheer pleasure of doing it, if you can just go along for the ride and not complain about the seatbelts or somesuch, then this book is ridiculously rewarding. You can see why it’s a masterpiece, and you’ll also be able to see why some people abhor it the way they do. In order to get anything out of the book, really, you have to forget about the destination, or your life at home. You just have to join him on the road, on the bus, in the car, on the truck, in the tent, in the bar, in the warehouse, at the dock, wherever he may take you.