Skip to content
Posted on April 8, 2019April 12, 2019 by pseudomagazine Posted in You and the FilmTagged anna biller, film review, issue 16, kimaya kulkarni, the love witch, You and the Film

“Do you know that most men have never even seen a used tampon?”

I watched The Love Witch (2016) written and directed by Anna Biller yesterday (4 July, 2018). I came across the film a few months ago when I was searching for films that were about witches, but at first, the premise of the film as it was described on the internet didn’t appeal to me. That was a period in life when I was sick of seeing women on screen discuss men even if it was for 5 seconds, and the premise of The Love Witch, is, afterall, a (seemingly) heterosexual, white woman who is chasing after male love. Moreover, the 1960s vibe of the movie as I saw in photosets on Tumblr distanced me from the film even further. A few months later I found myself searching for independent films directed by woman-identifying directors and I came across The Love Witch again. My newborn interest in cinema and filmmaking and a self-undertaken quest to watch movies by female cinema auteurs drew me in towards Anna Biller’s 2016 drama-thriller. 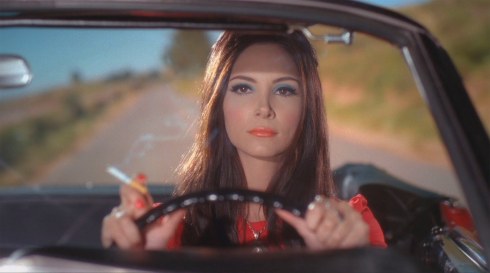 The movie follows the journey of protagonist/narrator Elaine (played by Samantha Robinson), who calls herself the Love Witch. Elaine moves to a new town, having recently lost her husband, looking to start afresh on her journey to find love. She is shown to be a practising witch and is adept with spells, curses and other Wiccan rituals. She is also shown in 60s heroine style as a makeup and black lingerie wearing, eyelash-batting performer of hyper-femininity. She takes different lovers, performs love spells on them, and each one of them dies after engaging  with her. As a viewer who doesn’t feel particularly “cinematically literate”, what pulled me in was the narration and the content of the story itself rather than how the story was told cinematically.

The movie starts with Elaine narrating her situation, and every scene in the film is preceded, followed, and sometimes accompanied by Elaine’s voice narrating her own experience. Her voice is an uncomfortable, haunting presence throughout the movie as she divulges her intentions, feelings, and tells her story as she wants it to be told. The unease created by her voice is due to the fact that the tone of Elaine’s narration isn’t always consistent with the tone of the events in the movie. Elaine seems creepily oblivious to the horror of the events that she is causing. Her narration follows the simpleton tone of the naive yet superficially pretty heroine of the 60s and classic Hollywood (and Bollywood). This contrast between Elaine’s ethereal voice on one hand, and her horrifying reality on the other, creates for the screen the most harrowing psychopath ever. This is what gave me goosebumps as I watched the movie: witnessing this chiffon-wearing, shoulder-swivelling, nakhre-wali, Misogynist Wet Dream being a cold-blooded Misandrist Serial Killer.

A woman controlling men is not even the most delicious aspect of the film for me, it is the random feminist insights sprinkled throughout the dialogue and the narration. The movie at times delicately, and at others strongly shows the contradictions within Elaine’s character, and therefore her humanity. The character of Elaine, on the surface, seems to be a ‘femme fatale’. She is clearly ensnaring men with her charms and totally being the metaphorical, sometimes literal, man-eater. But the film posits and explores her character way beyond that one-dimensional trope right from the start. She is shown to be a victim of abuse at the hands of her previous lover, as well as the male leader whose coven she used to be part of. Her narration gives the idea that her attitude towards life is one of passive acceptance. But her actions show that the same attitude is what is helping her make drastically assertive decisions. She does not portray anger, frustration, hatred, or any of the negative emotions that seem deserving of her situation. Instead, throughout the movie, she moves like a damsel in distress, hungry for a man’s love, talking matter-of-factly about abuse, and conforming completely to the idea of fixed gender roles and submitting to the male gaze. What creates unease in the viewer’s mind is when we see her maintaining that same image, not only as she brings a man to her bed, but also as she stabs him with a dagger and rips out his heart.

The Love Witch was an utterly healing experience. It cured all the twisted, pus-oozing scars that watching the Mindhunter gave me. (I could write a whole other article on why the Mindhunter is a waste of literary space, but I won’t because I never want to be reminded of that show. And that’s how men will continue to make shows that are brutally traumatic for women viewers and keep getting away with it.) The fact that this movie will never seem traumatic to men in the way that Mindhunter was for me, goes to show that society is literally already making women live their worst nightmares. I thought I’d never ever recover from watching the Mindhunter. And then I watched The Love Witch.

For someone who rarely watches experimental cinema, watching The Love Witch was an uncomfortable experience. The soundtrack, the dreamy flashbacks, the sudden focuses, and the context all contributed to a faint feeling of nausea as I watched it. But I couldn’t take my eyes off the film. I paused it multiple times to ground myself in the world and take a breath outside the weird, disturbing world of the film, but I kept going till the end. Elaine’s psychopathy was irresistibly empowering. She is, obviously, a highly problematic person (she also has an affair with and kills her best friend’s husband), but there was something so emancipatory and liberating about lying back and watching a female serial killer kill men. It is hard to explain because none of it was exactly cathartic or relatable or condonable, not that those are the three functions of art or that art even has functions, of course. But I will say that it was a highly purgative experience. I felt safe. Not because Elaine was a female serial killer, but maybe because Elaine was a female serial killer, you know? Maybe because I hadn’t realised that the cure for the mild insomnia I was experiencing after watching an unnecessarily well-produced show about male serial killers was to watch an artful film about a female serial killer. Maybe because Elaine expressed no fury on her face and made misandry look absolutely effortless. Maybe because she had found a way to be happy and feel safe in a world full of treacherous, power-hungry men by calmly asserting her dominance.

Kimaya is the co-editor of Pseudo Mag and a student of Philosophy and Comparative Literature.